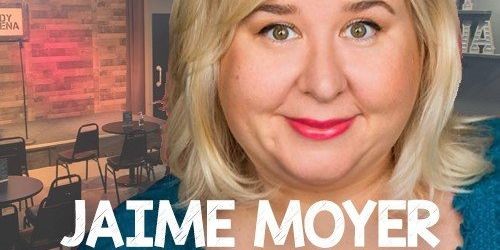 LA Legend, Comedic Character Actress Jaime Moyer (Bob's Burgers, Modern Family, AP Bio, Parks & Rec, The Second City) is joined onstage with a hand-picked crew of some of the bestest, most hilarious-est friends for an unforgettable night of improv, variety, and who-knows-what else.You know those performers you tell us are your favorites? Well that's her cast! It's those people! You're gonna love it!

Jaime Moyer is an actress and writer who resides in Los Angeles. She has voiced two characters on Bob’s Burgers, appears in a guest starring role on the new Fox animation The Great North, and has had recurring roles on many sitcoms including: AP Bio, Netflix series The Big Show Show, Modern Family, and Disney’s hit show KC Undercover. Jaime also appeared on Parks and Recreation, 2 Broke Girls, Jennifer Falls, Detroiters, Future Man, and more. Jaime wrote for three seasons of Nickelodeon’s LEGO City Adventures, where she helped create many memorable original characters.

Jaime has a lifetime love affair with live theater, and also has numerous stage credits. She is also an alum of The Second City – Detroit where she wrote and starred in original revues. Jaime occasionally appears as Guillermo’s wife on Jimmy Kimmel LIVE, and she was awarded the sole prize of Maestro at the Out of Bounds Comedy Festival in Austin, TX in 2011. She has taught improvisation all over the world, and has headlined numerous improv festivals. You can follow her on Twitter @Jaime_Moyer.